Biobord consists of two elements, the digital platform and an operating model. Platform received some new changes based on user surveys at the end of last year and more updates will follow after RDI2CluB’s second round of piloting that ends in April 2020.

Biobord’s Operating Model’s update has been finalized March 2020 and the user guides and manuals provide updated information for Biobord network and Biobord users. The latest version of the Operating Model can always been found from Biobord User Support -group.

The next and final update for Biobord Operating Model will be conducted summer 2020.

BioPaavo is a freshly launched bioeconomy business accelerator in Saarijärvi, Central Finland. It is developed with the support of EU funding, the City of Saarijärvi and The Institute of Bioeconomy of Jyväskylä University of Applied Sciences. BioPaavo aims to support the development and commercialization of new bioeconomy solutions in Central Finland (and hopefully in a wider region in future).

RDI2CluB -project had a showroom week in BioPaavo and it included a diverse program for different target groups of the project: regional SME’s, RDI-personnel and local students. All events aimed to develop the bioeconomy innovations in the area and raise awareness of the RDI2CluB -project and of bioeconomy in general.

BIOVALLEY is the region’s initiative to take the lead into the transmission from black carbon age to the green carbon age in Norway. A scenario study done by SINTEF (one of Europe’s largest independent research organisations) indicates that if the Inland region “join its forces” and the demand for green solutions regionally, nationally and internationally continue to increase it will create 25.000 new jobs and 20 billion NOK (2 billion €) of increased gross regional product for the Inland region by 2050. Biovalley is one of the most important tools in this work to make “The Inland Region – a leading powerhouse for a sustainable bioeconomy in Norway”.

The main areas of focus in the project is to:

The long-term goal is to facilitate the fulfilment of the findings in the SINTEF scenario in 2050.

Biovalley is led by Espen G Johnsen. Espen started his work as a project manager of BIOVALLEY the 2nd of January. He is the former mayor of Lillehammer, has been elected to the Norwegian parliament and been a strategic developer at Øyer municipality.

The BIOVALLEY initiative is a cooperation between the Inland County and County Governor of Innlandet and is financed for 5 years. The project is led by a board and the members of the board are set together both from politicians, the main bioeconomy clusters of the region and representatives from the farmers.

The second lesson of ecology and local patriotism

Another group of young people from Świętokrzyskie found out why it is so important to pay respect to the region’s legacy - both historical and natural. It is the result of the second lesson of ecology and local patriotism, organized by the Marshal Office of the Świętokrzyskie Voivodeship in cooperation with the project RDI2CluB on 18 February 2020.

This time it has been organized for 5th grade students from the Primary School in Bilcza. They were told about the mission of the regional government and the meaning of Polish patriotic symbols, met the Marshal of the Świętokrzyskie Voivodeship Andrzej Bętkowski and saw that they can be building bioeconomy of the region through nature friendly habits. All these domains have been once again gathered together under the common definition of patriotism. In a part devoted to ecological patriotism, the PP8 team presented the idea of the project #R043 RDi2CluB and encouraged to taking care of the surrounding environment. The student were particularly interested in the practical examples of bioeconomical solutions, i.e. biodegradable plates from bran or straws form flour and apple juice, which they could use instead of plastic dishes while having a snack during the meeting. We hope, we were able to inspire another group of young people to be the future bioeconomy enthusiasts! 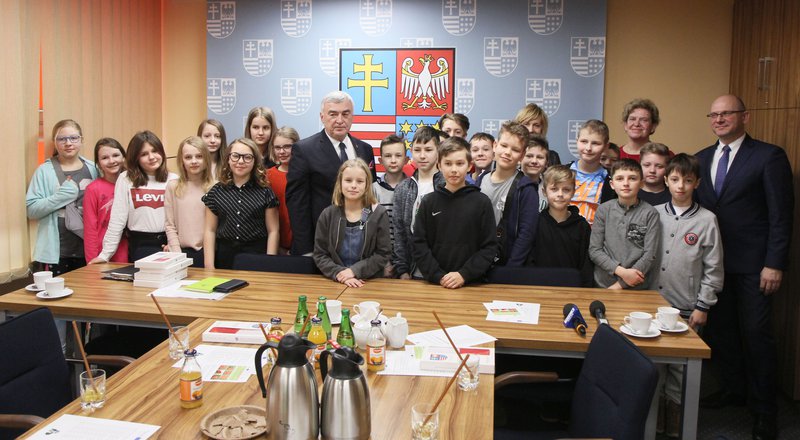 RDI2CluB on the session of the Youth Regional Assembly

The youth “feels the wibe” of bioeconomy better than we assume. We only need to give them opportunities to develop their ideas. We know this, because we were so warmly received during the recent session of the Youth Regional Assembly of the Świętokrzyskie Voivodeship on 4 February 2020. The team of the Marshal Office of the Świętokrzyskie Voivodeship presented the #043 RDI2CluB project there and encouraged young people to support and promote bioeconomy.

We were able to be present on the session thanks to the openness of the Office of the Świętokrzyskie Voivodeship Regional Assembly. The bioeconomy part was entitled “Bioeconomy – it’s simpler than you think”. While presenting the ideas we tried to encourage the youth to shape the habit of caring for nature, as it is an important for their future and the future of their region. They audience seemed very keen and interested in the subject.

To launch them in the activities of the RDI2CluB project we invited them to participate in the upcoming Agrotravel&Active Life Fair, where there will be a stand, devoted to bioeconomy and our project. We also wanted them to accompany us during the bioeconomy conference which is also a part of this event. By observing and helping the project team during this event, they will get to broaden their knowledge about bioeconomy and the project itself.

Their enthusiasm in the subject surpassed the team’s expectations! As soon as the meeting had ended we had a complete list of participants, willing to accompany us on the fair. The participants decided also to promote bioeconomy further during their own conference, which is being organized in March by the Youth Regional Assembly of the Świętokrzyskie Voivodeship. Of course we offer our full support in this matter as that what it was all about - to convey the idea of supporting bioeconomy to the youth of our region!

We would like to thank the Youth Regional Assembly of the Świętokrzyskie Voivodeship for warm receiving, and we hope our mission of promoting the bioeconomy among teenagers has only started and the idea should develop in the future.

By 2030, the world will need 50% more food, 45% more energy, and 30% more water. The solution is bioeconomy that is based on the sustainable use of renewable resources as well as circular economy models. Bioeconomy utilizes clean technologies that enable the efficient use of natural resources and nutrients, while ensuring biodiversity and supporting climate change mitigation.

Biobord is a place for you, if you are interested in viable and sustainable biobased business and networking with bioeconomy developers around the Baltic Sea Region. Find people with shared interests, team up and get support from our network of bioeconomy experts to build your business or launch your innovation to the markets.

Our growing network has been initiated by the following regions around Baltic Sea that specialize in bioeconomy:

Together we are piloting Biobord.eu as a meeting, co-working and innovation forum for bioeconomy developers with a passion for rural viability and sustainability.

Join our journey and share your experiences with us to help us develop the Biobord.eu platform. We are piloting the platform as a part of RDI2CluB project in 2019-2020 to improve our service based on the user experiences. 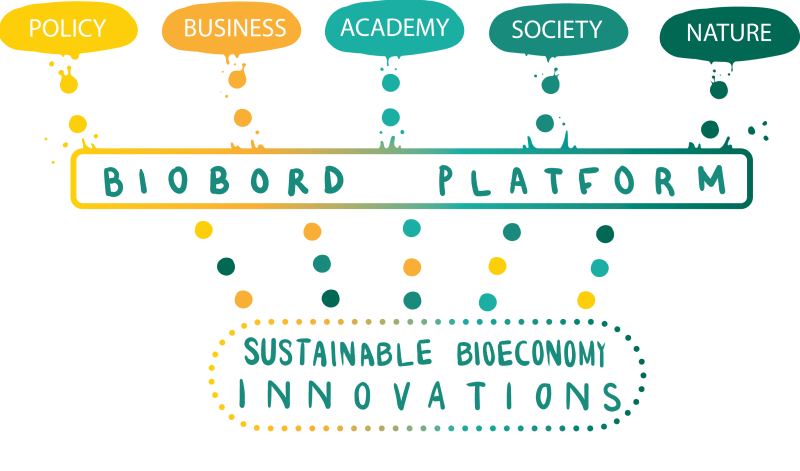 Our journey towards smart specialization in bioeconomy started with the creation of Regional Bioeconomy Profiles.

Data is key for evidence-based decision making in regional strategy work. Still, reliable statistics to show the development of bioeconomy do not exist in regional level. Therefore, we compiled it! Not just for ourselves, but also for the other regions in Finland, Norway, Poland, Latvia and Estonia.

Statistics are not perfect when it comes to bioeconomy and regional expertise is key for interpreting the results. Still, the visual tools for bioeconomy readiness give an excellent start for the regional discussions and commitment to joint actions. 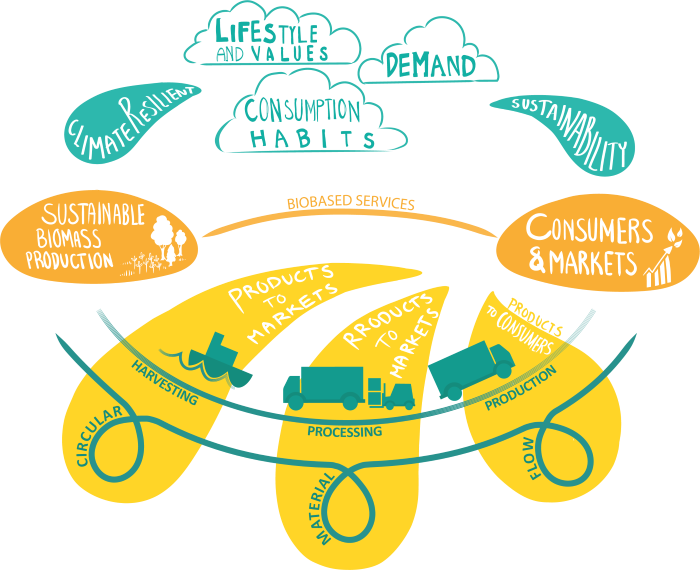 With data and regional dialogue on the potential for bioeconomy in our regions, we identified and established Joint Action Plans for supporting smart, sustainable and inclusive growth in bioeconomy in the rural regions of our network.

The Joint Action Plans were developed in cooperation with regional triple helix actors –regional authorities, business and academy. The planning involved also authorities working with design and implementation of national smart specialization strategies in bioeconomy. Furthermore, Joint Action Plans connect the existing EU, EUSBSR, national and regional policies and strategies to a roadmap for the development of bioeconomy innovation ecosystem around the Baltic Sea Region.

Joint Actions have been identified for regional level and for co-operation across the regions in the Baltic Sea. The international Joint Action for Boosting Bioeconomy focus on three areas:

We have identified actions that we can start right way and implement with our existing resources. Moreover, we have found action areas were we share an interest to plan jointly future actions.

The co-working has started and you can follow and join our discussions at our Forum under ‘Biobord Network Actions’!

To help our Network to work together on the Joint Action Plans and to connect our regional bioeconomy innovation ecosystems, we created Biobord. Biobord is an open virtual innovation hub for bioeconomy developers. On Biobord, we offer our network members tools for managing the project lifecycle, network building and management, interactive online capacity building, matchmaking and connecting with innovation support services.

Biobord has been developed in an iterative service design process. Now, we are in piloting phase, where we test and scale up platform functionalities and operations together with different user groups - researchers, regional development agents, students, entrepreneurs, inventors and innovation brokers.

The Biobord Operating Model describes the potential of our network, the functionalities of the platform as well as the user profiles and service paths. Furthermore, the Operating Model provides practical guidance and tools for the uptake of the Biobord, creation of the service paths as well as continuous improvement of the forum community building.

Read more on the Biobord Operating Model, joint the activities at Biobord and share your feedback to help us develop the platform into an attractive virtual co-working, networking, learning and innovation environment. 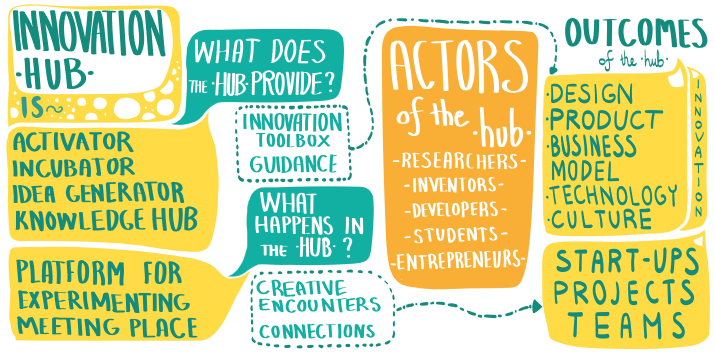